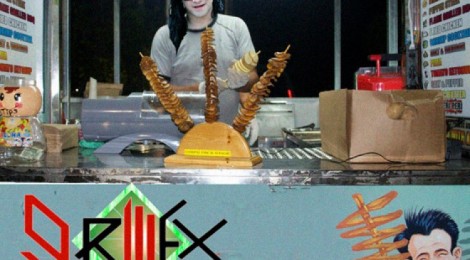 I don’t know if I’ve said this before but this is my life mantra: JUST BECAUSE YOU CAN, DOESN’T MEAN YOU SHOULD.

This applies to many an application. Take for instance, a dubstep DJ branching into the food truck business. No. Skrillex. Grillex. No. And it’s not good food. It’s sausages with Count Chocula cereal on it in a bun with bible phrases. It’s able to be ingested and then shit out but so are staples and condoms of crack. Insert, JUST BECAUSE YOU CAN, DOESN’T MEAN YOU SHOULD.

I understand that this dude may consider himself an artist in the musical form. I am not arguing that. What I’m saying is “why not?” is not a good enough reason to dive headfirst into uncharted territory called restaurants or even food trucks, to be more specific. You shouldn’t be making and selling food with the idea of “I like this so I’ll put it out there.” I like liverwurst sandwiches on white bread with mustard and cucumbers but let’s be real, most people don’t. I also eat fish eyeballs. That doesn’t mean I’m gonna start a food truck and made a fish eyeball taco (maybe with sriracha?).

I have no information on this Skrillex dude besides he’s the pop version of dubstep. I don’t know who pioneered this shit, who was the O.G., and who is a toy. I don’t care, either. I have friends that DJ the fuck outta this stuff and I’ve been to the parties and I feel like an old, snobby ad exec standing there. “These kids are all 19. Are those dreads? Is she wearing lights???”

For Skrillex to launch a food truck called Grillex is cheap and dumb. Simply put. At least put some fucking thought into it. There are people who do this type of thinking for a living and with this guy putting hasty, ill-conceived efforts out there, it makes these people look stupid. This DJ can do what seems so impossible to others. Little Joey in DC dreams of opening a slushy truck one day and then this guy (I won’t say douche, that’s a little harsh, he’s done a lot for electronic music, from what I can tell), turns a key, tapes a cigarettes to a bottle of water and sells it. If one finds success in one venue, one then thinks that they MUST move to master another.

This is the same thing as Jay-Z opening a club, Flava Flav opening (and quickly closing, I might add) a chicken shack and Michael Jordan golfing.

I’m talking about JUST BECAUSE YOU CAN, DOESN’T MEAN YOU SHOULD.

Let the people who live and breathe food and restaurants and bars and clubs do it. You other folks, just fucking pay us and front the money to start it and keep it going. Come have a free drink at the bar that you paid for. Don’t put Frosted Flakes on a hamburger. We’re not all idiots.