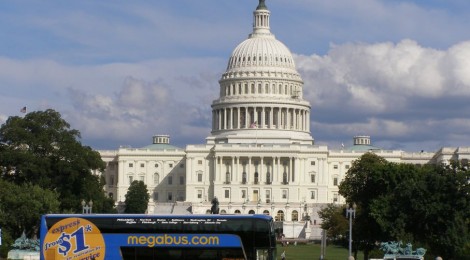 After I tweeted how Megabus should be ashamed of themselves, a rep replied, asking for my email. I just sent this to her. I didn’t even mention how the WIFI doesn’t work on any of the buses…

Yesterday, I was scheduled to leave Washington, DC at 11:30pm, New York bound. We (my friend driving me to the bus and I) were cutting it close to departure time due to bad traffic in DC proper and when we arrived at the parking lot, my bus in full view, there was no way for a car to enter the parking lot without paying. There was no drop-off area anywhere near the bus. There was an entry for cars planning on parking and an attendant barked at us that we couldn’t drop off there so we turned around and went looking for another entrance. From a distance, we saw another entrance and drove to it. We saw a buses only sign when we drove up but I was only being dropped off and my friend had no intention of driving through. A security guard jumped out of his truck and starting screaming at us, NO NO NO. I politely said, “My friend is just dropping me off, that’s my bus right there. Don’t worry, he’s not parking.” He got increasingly more aggressive, yelling louder, telling us we were trespassing. Clearly, we weren’t, I had PAID for a bus ticket. If I was trespassing, everyone working for megabus and all their passengers were also trespassing. I told him, I wasn’t missing my bus because of him. He threatened to arrest me. Security guards are not law officials and don’t have the authority to make arrests. I said, you’re being ridiculous and proceeded to walk with my bags to my bus. He GRABBED my left arm. I told him to get his hands off me and he grabbed my arm tighter, pushing me back towards my friends car. I was a paying customer, trying to get to my bus and this person was assaulting me. I got back into my friends car and we drove to an opening in the gate and I ran across the street to make my bus. When I arrived, the door was closed and they wouldn’t let me on the bus, even though I had pre-bought a ticket days before.

I asked when the next bus to NYC was and a woman said 12:30. I asked her what the name of the security company that hires the man who assaulted me was and he came up behind her and started yelling at me again. He said Security Assurance, among other things. Please note that he was posted at the opposite side of the large parking lot and he left his station to follow up on our confrontation and continue to accuse me of trespassing and threatening arrest.

I told him to stop talking to me and a different Megabus worker told me that I had to pay a $6 change fee. While in the same conversation, he referred to it as a “$5 change fee”. I said, in disbelief, that the security guard should pay it since he made me miss my bus. I walked away and went and sat in the New York line, noting the dollar difference in fees within a matter of seconds. 10 minutes later, the worker who told me that I had to pay a $6/5 change fee said that I had to move to the Stand By line. I said, why, I have a ticket. He replied, no, you HAD a ticket for the 11:30 bus and you have to buy a new ticket. I said, that’s not what you just told me 10 minutes ago. He told me to “watch my mouth” which is completely unacceptable (no one has the authority to dictate how someone expresses their views.)

I will admit I was vociferous in these confrontations and clearly frustrated and shocked with the discrepancies and physical attack. To be assaulted, firstly, is inexcusable. Secondly, to have ticket conditions change within a matter of minutes, is inexcusable. I called my husband and we found where the closest Bolt Bus was located and I walked to Union Station a few blocks away to take the 12:30 Bolt Bus back to New York. There was one driver who calmly and efficiently took our tickets and money, packed our bags, and drove us on our journey. Unlike Megabus, where I was threatened with arrest, manhandled, and lied to even before I got on a vehicle.

On my walk to Union Station, I called your “Customer Service” and spoke to a supervisor who said that the official rule for missing a bus is a buying another ticket and that only in New York, was a $5 change fee even an option. Please note, your employee at the DC parking lot quoted a $6 change fee to begin with which changed to $5 and then to another fullprice ticket. The customer service supervisor that I spoke to also said that I had to call another number (908.282.7420) to discuss the assault.

Please note that there were numerous witnesses to these interactions yesterday. In particular, my friend who was in his car watching the security guard assault me. I was too shocked to think to call the police and frankly, just wanted to remove myself from such a negative environment. Had this occurred to someone else with less qualms, a violent fight could have ensued, the police would have been involved, etc. I had enough presence of mind to leave before more confrontations developed, unlike the Megabus employees who were aggressive and inappropriate. I will NEVER recommend Megabus to my peers, friends, or family so that they do not have to endure the horrible experience I had yesterday.

← WHY I DON’T CATER WEDDINGS
HOT BUTTERED BOURBON →
"Pulled pork n slaw on toasted brioche @spoonfedny http://t.co/iUPdBaMZcV"
"Herbed ricotta & asparagus tartlet w lemon zest @spoonfedny (before & after the bellydancer) http://t.co/3lVoY1r4Rj"
"“@ChickNorrisDJ: It's hump day...know what that means? No, @nbcsvu is over for the season...” @DANCEonFOX time!"
"@ElijahCraig is a whiney little bitch, just so u know, @IMANthedog"